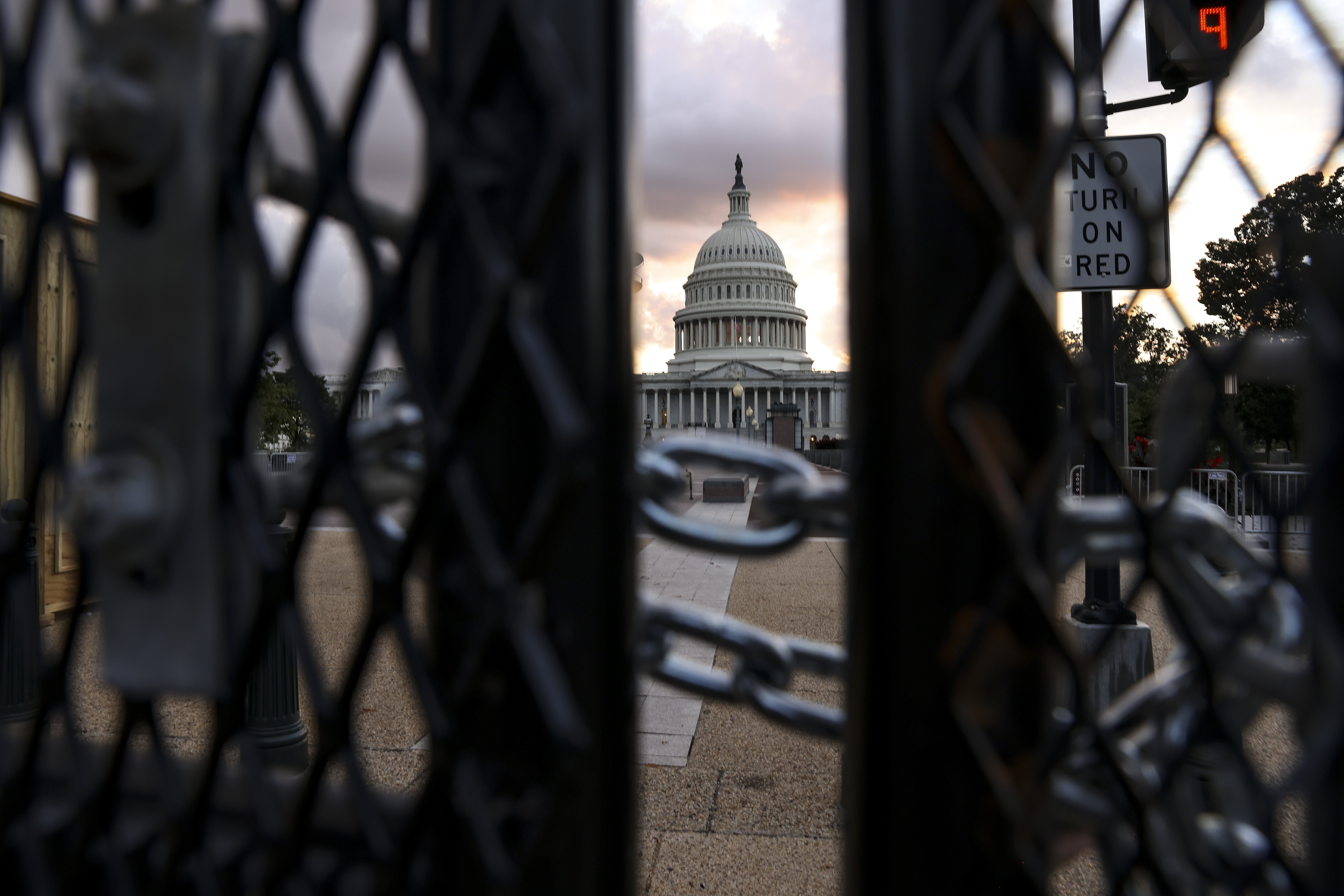 WASHINGTON — Washington and state capitols across the country braced Saturday morning for “Justice for J6” protests aimed at calling attention to what organizers say is the unfair treatment of people charged in the Jan. 6 riot at the Capitol.

In the nation’s capital, authorities erected fencing around the Capitol and the Supreme Court, conducted “tabletop” rehearsals to plan for combating violence, and vowed that police would be visible across the city.

“We are not going to tolerate violence,” U.S. Capitol Police Chief Tom Manger told reporters Friday at a joint news conference with the Washington Metropolitan Police Department. “We will not tolerate criminal behavior of any kind.”

More than 600 people have been arrested in the eight-plus months since the attack, more than 50 of whom have pleaded guilty to a variety of federal crimes and six have been found guilty in court, according to the Justice Department.

To the extent they were unprepared for the Jan. 6 assault on the Capitol, police indicated, they are ready to prevent and respond to illegal activity Saturday — whether it is perpetrated by primary demonstrators or counterprotesters.

Matt Braynard, executive director of Look Ahead America and the organizer of the event, wrote on Twitter that he expects “a 100 percent peaceful event in support of the nonviolent offenders…who have been charged.”

Still, the potential for chaos has made the rally politically toxic for leading Republicans, many of whom maintain the lie at the heart of the assault on the Capitol: that former President Donald Trump’s defeat was the result of election tampering.

Trump, who was impeached by the House in January for his role in inciting the violence, said Thursday that rioters have been “persecuted” by the Justice Department.

“Our hearts and minds are with the people being persecuted so unfairly relating to the January 6th protest concerning the Rigged Presidential Election,” Trump said in a statement. “In addition to everything else, it has proven conclusively that we are a two-tiered system of justice. In the end, however, JUSTICE WILL PREVAIL!”

Download the NBC News app for breaking news and politics

But the former president, who was acquitted by the Senate, and other Republican officials are keeping their distance from the rallies, which have law enforcement authorities on high alert for a repeat of the Jan. 6 melee. Neither he nor any member of Congress is expected to attend the main protest in Washington.

Trump has called the whole affair a “setup” for more arrests and criminal charges, a message that is being echoed in extremist online forums that were nerve centers for the Jan. 6 insurrection. As a result, the numbers at Saturday’s rally may be smaller than the original protest-turned-attack.

The rally point in Washington is Union Square, a small park just west, and in clear view, of the Capitol. Organizers have posted rules to the website of Look Ahead America, the group sponsoring the protests. They include: “travel in groups,” “do not wear or bring political, candidate or another organization’s paraphernalia,” and “be respectful to our security team and law enforcement.”

The Justice Department says that about 140 police officers — from the Capitol Police and Washington Metropolitan Police Department forces — were assaulted in January.

Metropolitan Police Chief Robert Contee said Friday that “No Gun Zone” signs have been posted around the protest site, and issued a reminder that it is illegal to bring a firearm within 1,000 feet of such a zone.

“The district gun laws will be enforced,” he told reporters.

But firearm restrictions vary by jurisdiction, and satellite protests are planned at statehouses and federal buildings in 17 states, according to Look Ahead America.

As for the U.S. Capitol, Manger said he is focused on protecting free speech and allowing for lawful demonstration.

Capitol Police said the National Guard would be available to assist in securing the Capitol perimeter if necessary, but would not otherwise be deployed.

“We have a strong plan in place to ensure that it remains peaceful,” Manger said, adding that officers would be ready to respond “if violence does occur.”