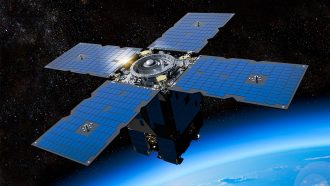 An atomic clock that could transform deep-space travel has successfully completed its first test run in space.

NASA’s Deep Space Atomic Clock, which launched on a satellite in June 2019, outperformed all other clocks in space during its first year in orbit around Earth. The clock, DSAC for short, was at least 10 times more stable than clocks on GPS satellites, which makes it reliable enough for futuristic space navigation schemes, researchers report online June 30 in Nature.

To navigate the solar system today, space probes listen for signals from antennas on Earth and then bounce those signals back. Ultraprecise, refrigerator-sized atomic clocks on the ground measure that round trip time — which can take hours — to pinpoint a spacecraft’s location.

A future spacecraft carrying a toaster oven–sized DSAC could simply measure how long it takes a signal from Earth to arrive and calculate its own position (SN: 6/21/19). Untethering deep-space navigation from Earth could someday enable self-driving spaceships or GPS-like navigation systems on other planets.

DSAC is so stable because it keeps time using electrically charged atoms, or ions, rather than neutral atoms, says Eric Burt, a physicist at NASA’s Jet Propulsion Laboratory in Pasadena, Calif. Bottling ions within electric fields prevents those atoms from bumping into the walls of their container. Such interactions cause the neutral atoms in GPS satellite clocks to lose their rhythm.

By comparing DSAC with the U.S. Naval Observatory’s hydrogen maser “master clock” on the ground, the researchers found that the space clock drifted about 26 picoseconds, or trillionths of a second, over the course of a day (SN: 4/10/19). That’s comparable to ground-based atomic clocks currently used for deep-space navigation, says DSAC principal investigator Todd Ely, also at NASA’s Jet Propulsion Laboratory.